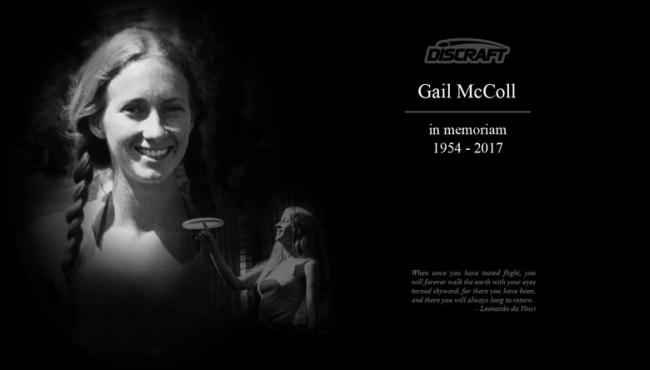 The disc sports community lost a beloved pioneer on January 1, 2017, when Discraft co-founder Gail McColl passed away in Toronto after a brief illness. She was 62.

Gail McColl was a lifetime contributor to the growth of disc sports who influenced generations of freestyle, disc golf and ultimate players.Gail began her disc career in Toronto, playing object golf in 1973 with Jim Kenner and Ken Westerfield. The trio would go on to host the Canadian National Exhibition Frisbee Championships the following year. Through her playing career Gail earned six Canadian Women's disc golf titles, the 1976 World Freestyle title and won the Women’s Disc Golf title at the 1978 World Frisbee Championships. A top competitor in all disc disciplines, Gail has been called the original women's freestyler and is credited as being the first woman to nail delay, body roll and air brush.

Her great passion for disc sports lead Gail to co-found Discraft Inc. with Jim Kenner in 1979. They set out to build a better product and began breaking the flying disc out of its culturally established role as a toy and into the high performance sports equipment it has become today. The many millions of smiles brought about by Discraft discs since those beginnings have earned Gail McColl and her Discraft legacy a permanent place in the rich history of disc sports. Gail was inducted into the Disc Golf Hall of Fame in 2015 and will be sorely missed by the entire community.